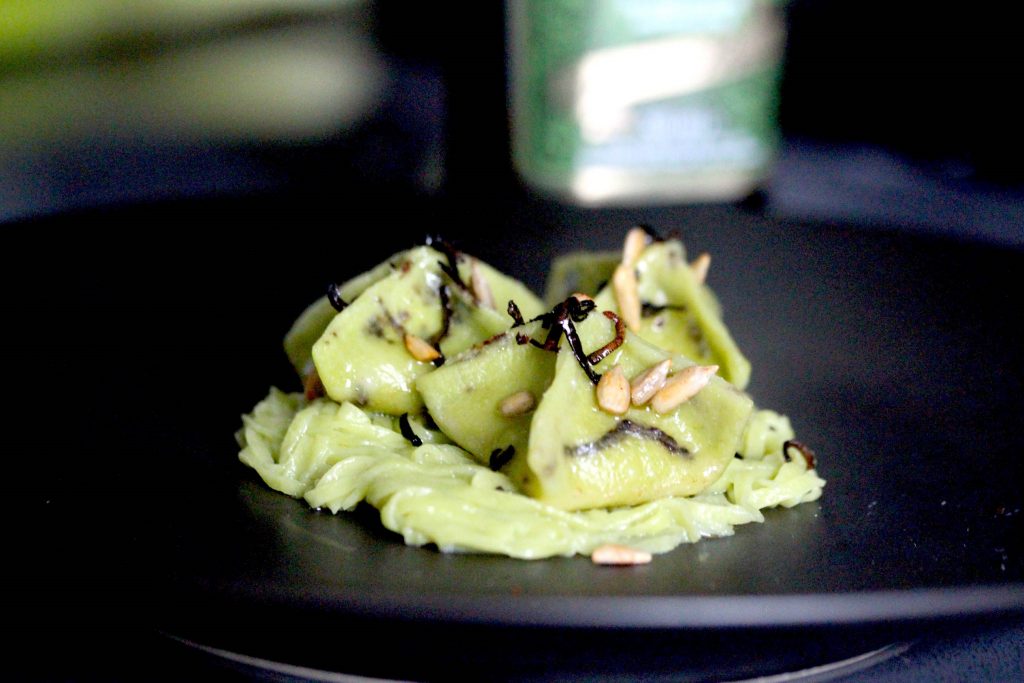 Serves 2 as a starter

Steam the green leek tops until soft and puree.

Mix the flour, the semolina and the puréed leek to a dough. Place under a damp tea towel and let the dough rest for a minimum of 10 minutes.

Heat olive oil in a frying pan, add the fine sliced white of the leek until it starts to burn. Drain on kitchen towel and set aside to cool.

Peel and cut the potato in to chunks. Boil it soft and mash it with olive oil, salt and pepper.

Sauté the sliced leek until just soft and mix with the mashed potato.

Place a teaspoon of filling on the pasta and cut out a pasta square. Gently brush the edges before sealing the ravioli.

Roll the remaining pasta through the machine until it is set to the thinnest and cut it in to linguini.

Bring a pan with salted water to a boil. The water should taste like seawater.

When the water is boiling bring it to a simmer and add the ravioli. Simmer for 4 to 5 minutes.

When the raviolis are cooked remove them with a slotted spoon and place them in the frying pan. Let them fry for a couple of minutes.

Bring the water back to a boil, add the linguini and boil for 1 minute.

Toast some sunflower seeds and add a pinch of salt and cayenne pepper.

Plate the linguini and the ravioli, add the remains of the burnt leek, some more olive oil and the toasted sesame seeds before serving.