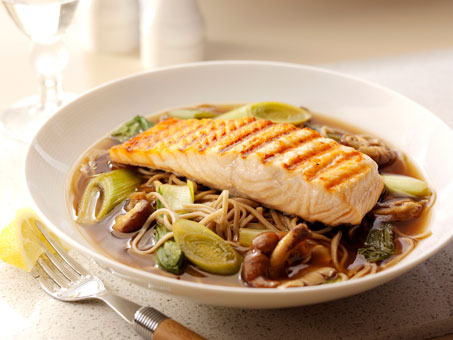 Put the dried shiitake mushrooms in a saucepan with 1 litre water. Bring to the boil, then gently simmer for 5 minutes to release their flavour. Add the lemongrass, garlic, ginger and tomatoes and stir to mix. Simmer gently for a further 15 minutes. Remove from the heat and leave to infuse for 30 minutes. Season to taste. Pass through a sieve to remove the aromatics and set aside, Ready to reheat for serving.

Heat a large frying pan over a medium heat, then add the oil. Place the fillets in the pan skin side down and cook for about 3 minutes or until crisp. Turn the fish over and cook for a further minute of so. Take of the heat and let it rest.

Meanwhile, heat the broth back up to the boil and add the fresh shitake mushroom and leek and cool until cooked through.

To serve: put a handful of soba noodles in a bowl, add the broth with the vegetables over the noodles and place a fillet of the fish on top of the noodles. Serve immediately.