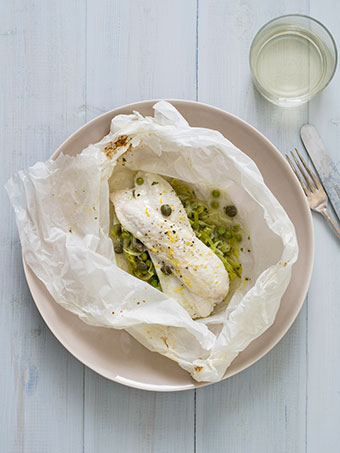 One of the quickest healthy suppers there is, baking fish in a parcel with flavourful leeks and herbs, really maximises flavour. If sole is elusive, this recipe also works well with sea bass, bream or trout fillets.

Slice the leeks thinly on the diagonal. Bring a pan of salted water to the boil and blanch the sliced leeks for 1 minute. Refresh in cold water, drain and tip into a bowl with the petit pois. Add the herbs, a little salt and pepper and a drop of olive oil and mix together.

To make the parcels, cut out four large sheets of baking parchment. Divide the leek mixture between the four squares, placing a pile in the middle of each and spreading out slightly with the back of a spoon. Lay two fillets of sole on top of each pile of vegetables.

Drizzle with olive oil and then sprinkle over the capers and a little lemon zest. Season with salt, pepper and a squeeze of lemon juice. Fold the edges of the paper together, from the outer edges towards the middle, twisting to seal. Just before you seal the parcels, add 2 tbsp of white wine to each.

Place the parcels on a large baking tray in the centre of the oven for 10-12 minutes, until the fish is just cooked through. Remove from the oven and serve immediately, still in the parcels if you like.